Would you believe that I thought I was going to miss Thanksgiving this year?

After all, I’m in Chile. This is not a holiday. It’s not the start of six weeks of festivities, food and drink that goes from the last Thursday in November until January 1st (or so) every year. It’s just another day on the calendar. I was completely prepared to go about my day just like it was any other day.

Though, to be fair, somehow they still managed to have advertisements for Black Friday.  Madness, I tell you, madness!

I should have known better. The expats here were never going to let Thanksgiving slip by unnoticed. There were turkey dinners at Irish bars in Santiago, brunch celebrations at various restaurants and informal get togethers at least from here to Santiago. My friend Hanna (for whom I had previously purchased and carried Stovetop stuffing across international lines just for this purpose, pictured below) invited me to join her and some friends in Viña. Lauren (our hostess in the blue dress, bottom picture, head of the table) had friends visiting from Colorado for the week. They rented a large apartment near the beach and invited what I’m assuming is the majority of the American expat community (along with several Chilean friends and family) to a bilingual dinner.

What a fantastic way to spend an evening. Everyone brought something, which made for quite the spread. I brought a quinoa dish, guacamole and wine, as I thought I should have (1) something I know I will want to eat, (2) something I know everyone else will want to eat, and (3) of course alcohol. 🙂 Though I was unsure how the quinoa would be greeted, I was pleasantly surprised to hear several exclamations of, “we’re from Colorado, of course we love quinoa!”

Pavo (turkey) is (perhaps obviously) not as readily available in Chile as in the U.S. But they had found and roasted a large bird. It was carved up, next to all the usual trimmings. Cristian accompanied me, for his first American holiday and first Thanksgiving. I have enjoyed so many different Thanksgivings – those with family, with friends who are family, with my Marines when deployed, in NYC many years ago when I got to be in the Macy’s parade. This particular celebration shared so many of the typical characteristics of Thanksgiving – lots of food, alcohol, football even(!) and excited conversations amongst new and old friends. The only things missing were any sort of stress about everything coming out hot at the same time, ensuring the rolls got cooked or any familial arguments.

We concluded our evening by saying what each of us was grateful for (in Spanish or English, as your preference). I walked home with Hanna and Joaquim, incredibly grateful for the entire evening.

So I suppose that this is a continuation of my post from last week. I’m meeting and making new friends all the time. How very grateful I am this year for so many things – to be in Chile; to have found so many new, amazing people along the way; to be living a life I want to live; for the never-ending adventure; and for all of you. Oh, and I also just found out that I DID get offered the English teaching job at the Chilean Naval Academy. I start in February. 🙂 So very happy! Till next time, 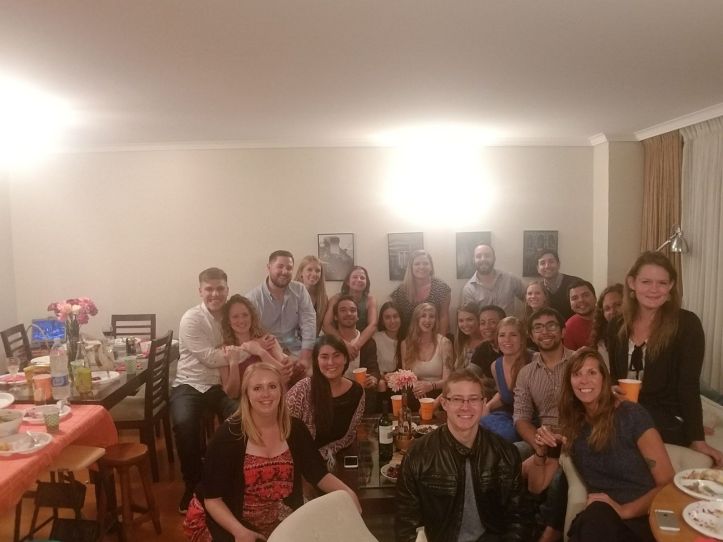