Where It All Began – Camp Pendleton, CA

For this post, I’m back in the USA. I know, I know – I just got to Chile, and I already left?! Yes, and for numerous reasons, it’s absolutely worth the quick trip back.

Allow me a moment to explain. I still have a few more years in the Marine Corps Reserve. I needed somewhere to go for my annual training requirements. As I thought about it, I contemplated different units on the East Coast.

Then I thought again. Why should I stay East Coast? If this is a year of change, a year of adventure and a year of taking chances, why not try to get back to California? It was the place I most loved.

My search led me to the Logistics Section (G-4) at First Marine Expeditionary Force (I MEF). I was beyond excited. My first few days were a flurry of nostalgia. It started when I stepped off the plane into the beauty that is San Diego and continued as I drove north on I-5. I returned to Carlsbad and Encinitas to explore the ocean and new restaurants that have appeared. How things have changed, and stayed the same! I ran into old friends, and a few Marines I knew from my old units. One friend in particular I just happened to see walking across a parking lot, and we were so shocked to see each other we stopped in our tracks and began to laugh. The last time I saw him was Iraq – when he and his Marines were moving north and had stopped for a meal in my improvised chowhall. The Marine Corps is such a small place, and it is amazing how life seems to take all of us full circle.

Then I got really nostalgic (so buckle your seat belts!). I remembered the day I got my orders to southern California – oh so many years ago. It really is mere moments that shape our lives. And I thought how different my life might have been without Camp Pendleton. It was not foreordained that this would be my first duty station – but I was a determined young lieutenant. 😉

I was at The Basic School (TBS – also known as Taco Bell for Supper, The Big Suck, and various other funny or derogatory names). It is six months of basic officer training – a lot of time in the field, cleaning weapons, running around, general harassment and not a lot of fun. It is also the place where most second lieutenants receive their military occupational specialties (MOSs) and their first duty stations.

I got logistics. This was my second choice, but only because I thought I should ask for something “cool” like intel. Of course, I didn’t get intel. But I wasn’t really upset. Logistics was in my blood, so I felt like the Marine Corps had actually gotten something right.

There were a bunch of us new logisticians, probably 20 or 25 second lieutenants. One day, they put us all in a classroom to figure out duty stations. The room usually meant to hold 200+ young officers for classes in tactics or land navigation or simple admin seemed empty. It also seemed strange that the days of struggle were nearly behind us. We had made it, and were preparing to move on to the “real” Marine Corps. That felt so good!

We had three choices: Camp Lejeune, NC; Okinawa, Japan; or Camp Pendleton, CA. The captain in charge started with CPEN, asking for volunteers. Silly man. You don’t START with the most coveted duty station. I leapt out of my chair, threw my hand in the air, and generally conveyed as much possible enthusiasm (or derangement, depending on your perspective) for my chosen duty station as a person could convey. I didn’t really notice anyone else (completely in my own world, literally trying to WILL San Diego into my future), but most of the other lieutenants must have also raised their hands (and commented on my insanity).

The captain switched tactics. He said, “all right, let’s start with something else”. Smart move. I forget whether he went to Okinawa next, or Camp Lejeune. But he had a certain number of billets to fill at each location. The last few slots were tough to fill, but he was patient, refusing to move on. Eventually somebody raised his or her hand.

The entire time, I sat in my chair, fairly bursting with anxiety. I was trying to remain still, disappear (if at all possible) and looking at the table to avoid eye contact. I had no idea how this would turn out. I kept waiting for him to simply point at us and say, “you, you and you – you’re going here; you, you and you – you’re going there”.I felt that I might be first on the chopping block (based on my initial display). This was the way of the Marine Corps – no choice; suck it up; do what you’re told.

But I was determined. If the Marine Corps wanted to send me somewhere else, it was going to have to give me a direct order.

I did. I enjoyed every minute (or nearly – some days were just hard). I lived three blocks from the beach. I watched the sunset every night I was home in time, just because I could. I partied with my friends. (Oh, to be a lieutenant again!!) I PT’ed with my Marines. I almost deployed to Afghanistan. I did deploy to Iraq. I grew as a person and as an officer. I became someone I was proud to be. It was here I fell in love with the Marine Corps. It was here my best memories were made. So happy to be home again!!

I thank you for indulging me in this walk down memory lane. I hope you enjoy the pictures. Next time, more on my adventures in Chile! 🙂 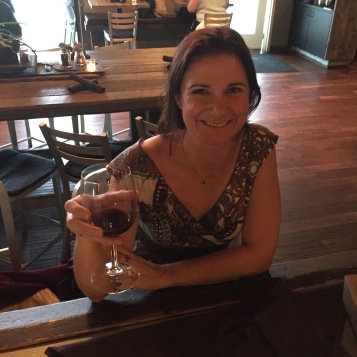