Getting to Know Chile: The Feria, Zappallar

One of my new friends from the InterNations event is Patricio. He is Chilean, but spent many years in the U.S. working as an engineer at a shipbuilding company. So his English is excellent, and we have a common Navy connection (Chilean and U.S.!). He kindly offered to show me the surrounding area, and we’ve enjoyed several outings together. He is one of those people with whom one finds it easy to spend time. Conversation is always interesting and easy. One of our first outings was the Feria.

During my previous visit to Viña, I had not actually made it to the Feria (gasp!). I know, I know – how could I, as much as I adore fresh fruits and vegetables – have not made it to the local market? Well, I didn’t. But that situation has been satisfactorily rectified. Last Saturday, Patricio offered to accompany me to the Feria. A bustling conglomeration of brightly colored awnings and shouting vendors, the Feria is simultaneously fun and slightly overwhelming. (pics below) We start down the first aisle, and I’m thrilled to see so much beautiful produce. One can also find olives, nuts, beans, spices, eggs and assorted other items. And of course, it’s all much cheaper than the grocery store.

Patricio stops me to try chirimoya. He’s excited to share several South American fruits with me, and I’m happy to taste them. I’m also very happy he’s with me, because I would never had known that I could ask for a taste without buying; nor would I have had the nerve to do so on my own. But the vendor doesn’t even hesitate. When Patricio asks if I might taste the fruit, the vendor pulls one off the display and cuts it in half, handing me the fruit.

It’s deliciously delectable! I’m not sure how to describe the taste. It’s slightly reminiscent of coconut, but sweeter and milder in flavor. It immediately becomes my new favorite fruit. As we continue to walk, Patricio stops me periodically to try something else. Next is the pepino. Also delicious, this one reminds me more of cantaloupe. He purchases a few more items for me, insisting that I must try them all.

I’m so excited to be learning all these things. I have tried unknown fruits before, but without expert advice or really knowing what I was doing. My individual efforts were not successful, and so I had been put off trying anything else unfamiliar. Now, armed with the knowledge of what I like and what things are called, I feel confident I can return to buy all my favorite new fruits with ease! The morning was a complete success. I had all the produce I needed for the week; I had some new fruits to try; I had interacted with the vendors (still so intimidating); I was looking forward to returning to the Feria. I even had a “new” pull cart.

Since most people walk everywhere, it is much easier to put one’s items in a pull cart instead of carrying them by hand. Everyone here has a pull cart. Patricio was kind enough to give me his old pull cart, as he had recently purchased a new one. Pulling my cart behind me, with all my goodies from the Feria, I am feeling more and more like a local. I love it.

Another day took us north of Viña to another beach town called Zappallar. The day is cloudy and overcast, but the views are still beautiful. This town mostly comes alive during the summer, so buildings are mostly closed up and deserted. Construction during the off-season is occurring in preparation for next summer. It’s a lovely and relaxing day, a drive through the countryside and a stop for lunch on the way back. We stop at one restaurant and observe semi-cleaned fish in a trap. At first, we assume it’s to keep the local cats from eating the fish. But we stop to speak with a man putting fish in the traps and he tells us that the fish are used as bait to catch crabs (both pictured below). Fascinating! If you look closely, you can see the blue opening in the top of the trap for the crabs to enter. They looked fairly delicious. J

Lunch is a Chilean specialty – cazuela. This is a broth-based soup (which makes me excessively happy) with meat, potatoes, Chilean squash, carrots, rice and corn. On a damp, cold day it’s absolutely heavenly! Presented in a clay bowl and steaming hot, I sigh as my soul sings. Patricio and I fortify ourselves with the food in front of a fireplace. It’s a perfect end to a lovely day with my new friend. I hope you like the pictures! Until next time, abrazos y besos!! 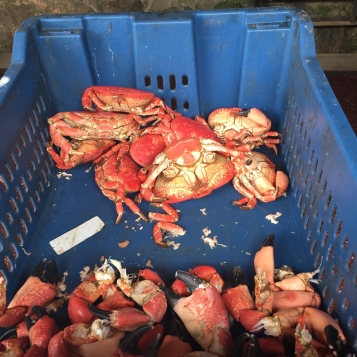 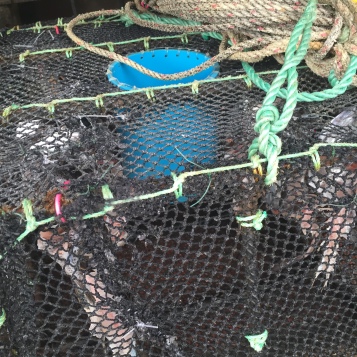 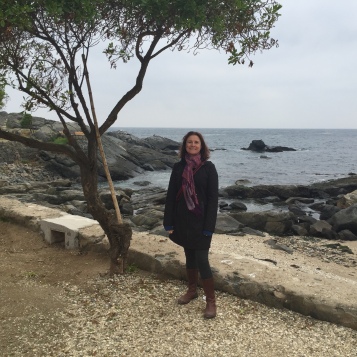 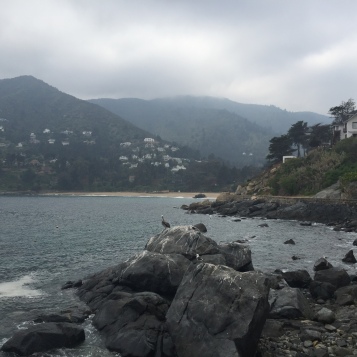 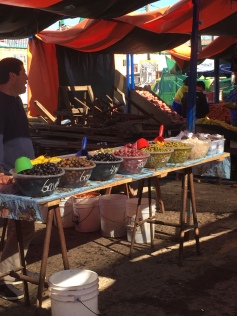 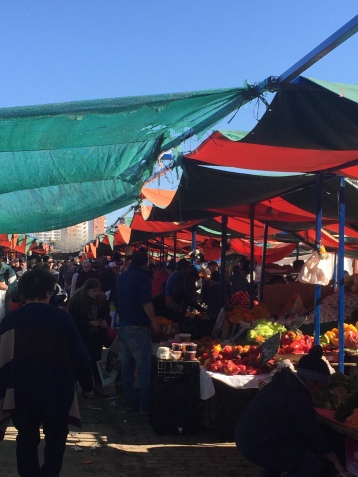