It’s hard to believe that I’ve already concluded Week 2 here in Santiago. We’ve learned so much. Monday was an overwhelming day at school. I felt like we’d learned so much the previous week, and then we learned all this new stuff on Monday (6 pages worth of notes). They are definitely not kidding about the immersion aspect!! There is no attempt to go back and review anything. We just keep moving forward. I’ve got about 20 pages of notes from the rest of the week.

As I sit here, I am developing methods for ways to digest everything I’ve learned, especially vocabulary and sentence structure. We’ve learned a lot of words, and some verb conjugations. So I think I’m just at the point I can start putting sentences together more cleanly.

I think my class has learned much more vocabulary than other classes at the same stage, because of one of my fellow students. Jeff is from the U.S. (Las Vegas). He’s an older gentleman and a law professor. He always wants to know exactly how to say what he wants to say. For example, he wants the words for “lawyer”, “discuss”, “asylum”, “contract”, etc. etc. It definitely keeps the class lively (oh yes, and we’ve gotten into several Trump discussions). The teachers seem to enjoy our class. And after temporarily visiting another class, I can understand why. We are all really engaged and make attempts to talk about about our reasons for visiting Chile, our experiences here and in our home countries. The other class was kind of dead. Perhaps it helps that two of the women in my class are here because they are getting married and their fiances (one Chilean, one English) are working here. Jeff is doing legal work while he’s here. So we’ve got some pretty interesting people in class.

While I’m struggling to understand people speaking, I know I’ve already learned quite a lot. I have successfully learned how to order in a restaurant and can get through a transaction at Starbucks or the grocery store if the cashiers don’t talk too much. 😉 The waiters have been very understanding and helpful. I can tell that they appreciate me just attempting to speak Spanish. The barista was the same way, but the cashiers at the grocery store just dismiss me with a wave of their hand.

I’m listening to Spanish music in the morning. I started with Enrique – I finally know what “Bailando” means! – but have quickly moved onto other stuff as my housemates have the inside scoop on the good songs. YouTube (Getting addicted to YouTube!!) has videos of the songs with Spanish lyrics so I can translate the songs. Haven’t started that yet, but it seems like a fun and productive way to keep learning. I took my first test today! (Picture below, the total score was 94.﻿) 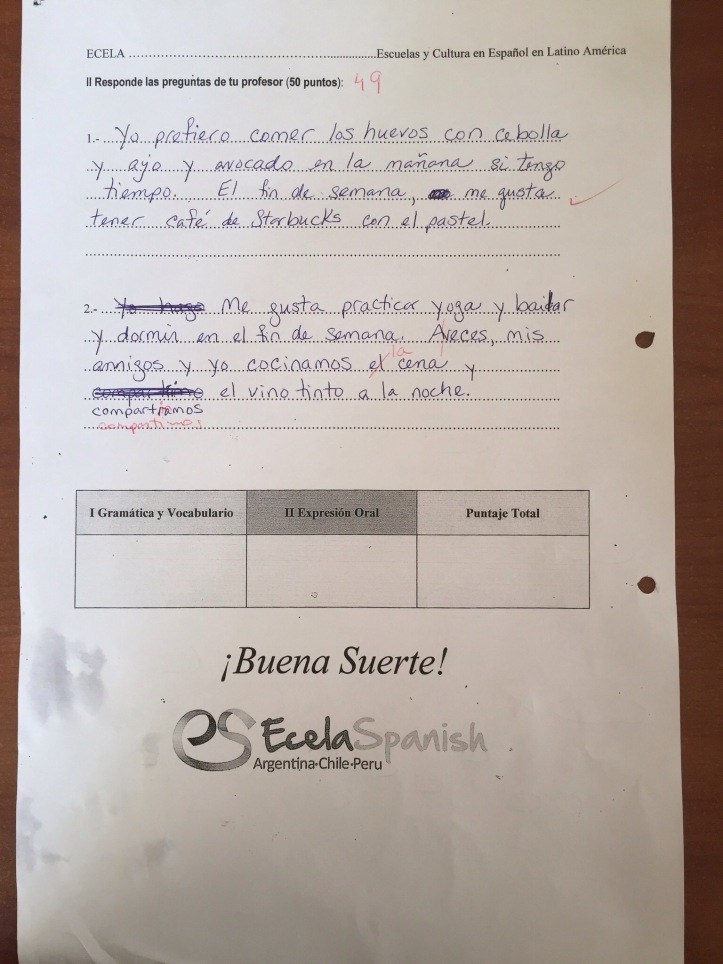 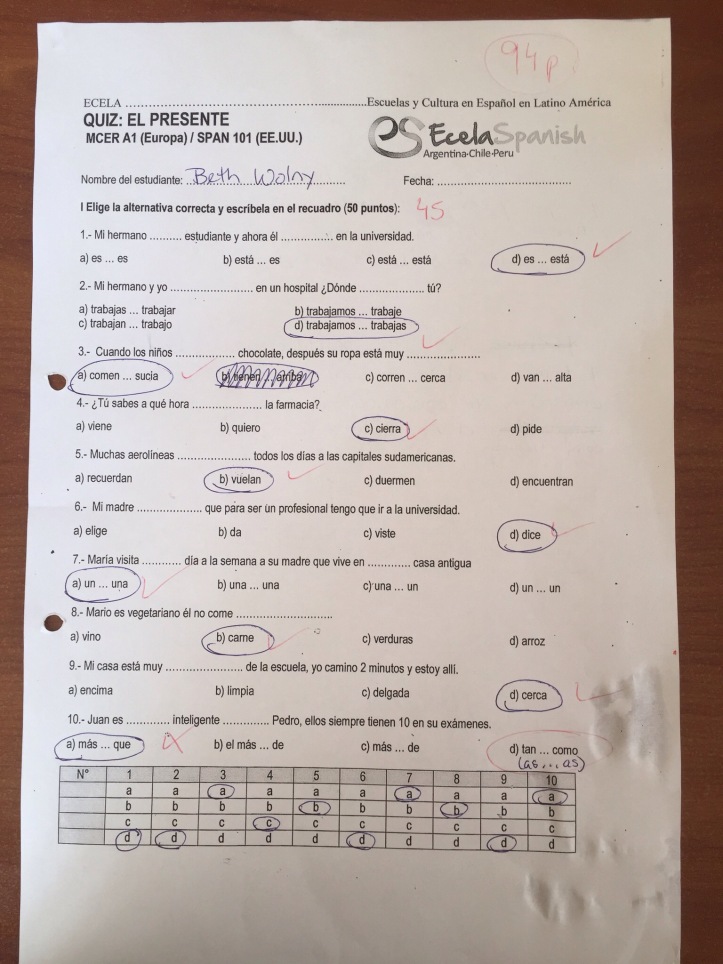 And yes – I have visited the Starbucks here. Chileans don’t believe in real coffee. They have Nescafé, literally everywhere. It’s terribly vile. The only brewed coffee I’ve found is at Starbucks. They call real coffee “cafe cafe”. Coffee is just a treat for me. It’s extra time to get there in the morning and it’s expensive! A grande black coffee cost me nearly $3! So I’ve been getting by with just water or green tea most mornings. No headaches either, which really surprised me. There’s so much about this experience that has surprised me. But I’ll save that story for my next post. 😉